Accelerating increasing trends are recorded, especially in the last two to three years, in the damages awarded by the courts in patients who have suffered damage to their health or relatives of patients who died from errors or omissions of doctors.
As market executives explained to the magazine "Insurance World", compensations paid by the insurance companies are not only of a higher value per incident, but they are also more frequently awarded, given that more and more cases of medical mistakes reach the courtrooms.
They point out that the evolution of technology in medicine allows patients and lawyers to seek easier and more effectively the causes of a medical mistake or omission and then turn to court seeking compensation. Striking are the cases of obstetricians who, as we shall see below, are involved in most cases reaching the courts, but also in the cases of higher compensation.
Another reason why the compensation awarded by the courts have increased has to do with better information on which the Greeks have, which allows them to more easily assert their rights.
For their part, insurers are required to use the knowhow and expertise available to better manage the risk which they undertake, covering the civil liability of physicians and in this way:
- To price more accurately the risk
- Decide what risks will cover and what not, but
- To address more effectively the cases brought for compensation.
Before we see exactly how the compensation which the courts decide have evolved in recent years, let's present through some indicators, what is now the picture of the health sector in Greece.
In the current market work approximately 180,000 people who are in direct contact with patients and 210,000 individuals who have an indirect relationship with the industry.
In the health sector operate around 85,000 businesses, of which 19,000 provide direct services, while Greece appears in OECD to have the most physicians in reference to its population.
Characteristically per 1,000 inhabitants, Greece has 5.4 doctors and is first in a total of 31 countries, with Belgium being the second, which employs four doctors per 1,000 inhabitants and third Switzerland with 3.9 doctors. Here are the major markets such as France, which has 3.4 doctors per 1,000 inhabitants, Germany with 3.5 doctors, Italy and Spain with 3.7 doctors.
Overall in our country are employed over 67,000 doctors.

In what now concerns the activity of the insurance market, on an annual basis, the industry displays premium production derived from the civil liability of doctors of 11 million EUR, which is considered as extremely low, compared to other major national markets, where each young physician assumes along with the starting of his/her activity an insurance policy will be undertaken that will cover the risk of liability.
How important it is to cover the liability for a doctor emerges from the survey data conducted by the University of Piraeus, which recently presented in the sales network of a large insurance company.
These figures therefore show that the average damages awarded by specialty are at very high levels. It is characteristic that the survey data, which go back a decade, gynecologists - obstetricians appear to bear an average compensation of around 623 000 euros (!), the highest in the market. Very high in terms of the damages awarded are also neurosurgeons with an average amount of about 460,000 euros, as well as microbiologists with 391,000 euros.
In the three lower levels of the relevant table shows otolaryngologists with about 117,000 euros, cardiologists with about 171,000 euros and plastic surgeons with approximately 172,000 euros.
It is also interesting, as shown in the same research, how the allowances are spread and for what cases the highest amounts were awarded 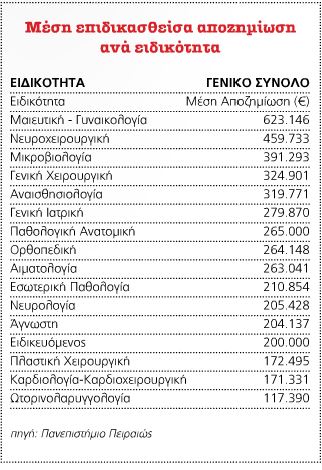 In particular, death was the reason among the higher compensation cases (36.93%), followed by permanent disability cases by 35.89%, the temporary impairment for which medical intervention is necessary by 14.63%, the temporary impairment for which hospitalization is needed with 4.53%, the cases where it is necessary that medical intervention is needed to keep the patient alive by 2.44% and other medical cases which cover 5.57% of the number of incidents for which damages are awarded.
Also, the higher average awarded compensation is recorded for the amount of 434 086 euros, paid on death cases. Below are permanent disability cases with average compensation of 356 839 euros, several other incidents with average compensation 193 800 euro, temporary damage for which hospitalization is necessary with average compensation of 82,027 euros and incidents that require medical intervention to the patient to be kept alive, the average compensation stood at 36.810 euros. Finally, the cases where temporary impairment is recorded and is considered that medical intervention was necessary, for which the average compensation is in the order of 36 449 euro.
What is the cost and what do they offer, the insurance contracts provided by insurance companies covering the liability of doctors?
Market evidence shows that insurance companies, in their majority, have defined the annual premium for a risk of 1 mil. EUR, without doctors' minimum contribution, between 1,900 and 3,000 euros. These are premiums relating to obstetricians, professionals who, as mentioned above, have incidents with the highest compensation. For surgeons corresponding amounts vary from 1,400 up to 3,000 euros, as well as for anesthetists, while for dentists premiums are at much lower levels, starting from 750 euros, but again, reaching up to 3,000 euros.
Insurance companies provide among others, costs and attorney's fees in civil and criminal courts (from company to company differentiate coverage), as well as the payment of compensation often without necessarily that the case reaches court (outside court settlement) and cover cases which are likely to arise as the policy is in effect or after one or two years from the end of it (depending on the premium chosen by the doctor).
Of course, the allowances cover the risk of loss of life and injuries from errors or omissions resulting from negligence and exclusively related to the exercise of the medical profession, as well as accidents that may occur in the clinic where the responsibility lies with the doctor.
Source: www.insuranceworld.gr